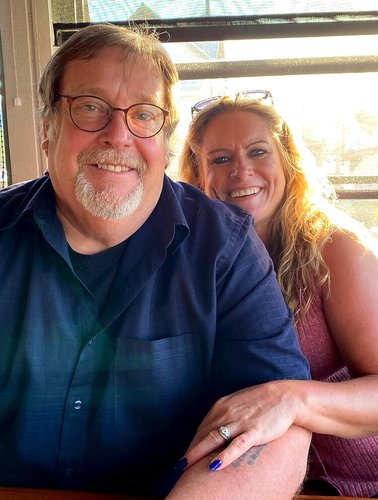 Jon and Jodi make their home here in Anoka, Minnesota.

Jon has made his main living in the world of radio for 38 years. He spent 23 years working with the Northwestern College Radio Network (Now known as the University of Northwestern) starting with KDNW in Duluth. Then with KTIS as the morning host and eventually managing the station until 2006.

For 7 years Jon worked full time on BOB FM in the Twin Cities and still hosts the Saturday morning show there. Since 2014 Jon has worked for Life FM radio in Bakersfield, CA. He works from his home studio for most of the year but travels to California on and off throughout the year.

During his time on the air he has also serviced 4 churches as their full time Pastor.

Jon and Jodi do as much camping as they can during the summer. Love to walk around the lakes in Minneapolis and spend time family and friends.

Their house is filled with two Great Danes, one rescue dog of mixed background and an aging Chocolate Lab.

Just as a side note... Jodi's gift is hospitality and it is virtually impossible (or so it seems) to cook for any less than 40 people!

It is a an honor and a pleasure to serve Restoration Church in our home town!